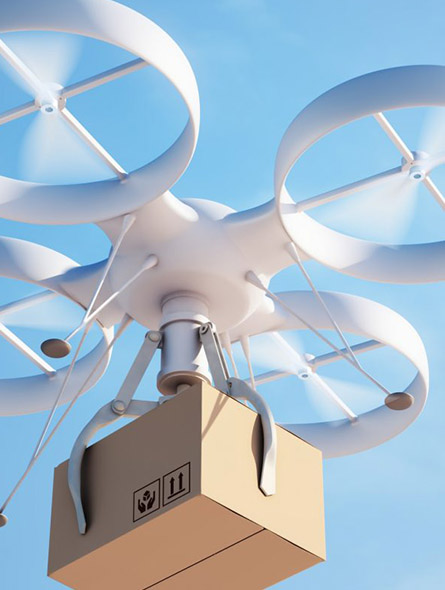 Amazon customers may soon be priming for a special delivery. And, it’s not about what they ordered but how it’s being delivered. Amazon unveiled its Prime Air delivery drone last summer, which has left consumers and drone enthusiasts on the edge of their seats.

If this sounds familiar, it is. The internet retailer has been improving on its drone technology over the years to bring its next-generation electric drone closer to the skies and to your doorstep. Who knows? It may be at your home sooner than you think.

Named the “MK27,” Amazon’s delivery drone service Prime Air is breaking barriers over the more than two dozen drone designs the company has tested in the past. This new “hybrid design” can show off its moves by taking off and landing vertically, like a helicopter, and flying horizontally and aerodynamically, like an airplane. This latest advancement is considered to make this drone safer, more efficient and more stable since it operates on six degrees of movement instead of four. Watch the video to see for yourself.

You may have some questions about how the Amazon drone delivery service can navigate around obstacles, let alone on its own. Here’s how: Artificial Intelligence (AI), combined with some pretty cool technology and features, allows the delivery drone to operate more autonomously. Thermal cameras, depth cameras and sonar are used to detect hazards while onboard computers are programmed to automatically identify obstacles and navigate around them. For example, Prime Air drones will be able to detect people, animals and even wires or backyard clotheslines. Even more impressive is the drone’s ability make appropriate moves and delivery decisions based on changes in the environment, either while in transit or if it encounters a moving object. Amazon took drone safety one step further by protecting the drone’s rotors with covers, which serve as wings during sustained flight. The company said that in addition to acting as a safety feature, the rotor covers allow for a more dynamic and faster flight.

Amazon is working hard toward its goal to design a drone with a 15-mile range that can deliver packages under five pounds within 30 minutes. If you’re thinking that limits deliveries to small packages, you’re correct. But did you know that 75 to 90 percent of items purchased on Amazon are under five pounds?

As exciting as the thought may be of having an Amazon drone delivery service deliver a package to your home, there’s still no definitive timeframe on when it will happen. Over the years, the Federal Aviation Administration (FAA) has approved Amazon drones for test flights; however, regulations require each new prototype to have a special airworthiness certificate. Additionally, Amazon is still faced with overcoming certain social and technological obstacles, which include drone noise and the challenges of flying in inclement weather (e.g., rain or snow). The good news is the company is working hard on making drone delivery a reality. When that will happen, is up in the air.

Are you interested in the aviation industry, or learning how to design and build an unmanned aerial vehicle? Discover all that’s possible with an engineering degree from Vaughn College.