Vaughn Graduate Joan Cruz Launches Engineering Career at SpaceX: ‘Never Give Up on Your Dream’ 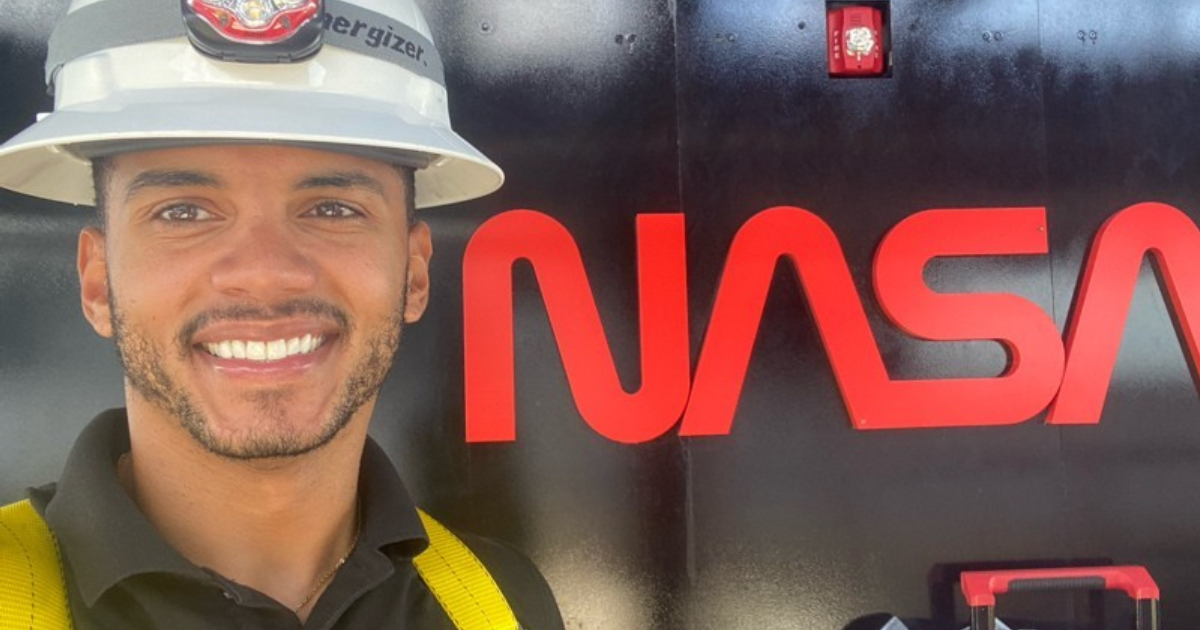 From humble beginnings as he learned the English language to working as a SpaceX engineer, Joan Cruz ’20, a Vaughn College mechanical engineering graduate chronicles how his career path found him in a way he least expected.

At the age of seven, Cruz moved to the United States with his mother from the Dominican Republic to join his father and sister who had settled in Maryland. He attended elementary school with the added challenge of learning the English language. Cruz said within six months he broke the language barrier and began making friends. Shortly after, they moved to Queens, New York where Cruz went on to attend Forest Hills High School. “My parents worked hard to give me and my sister a good life in the United States,” Cruz said. “I am grateful to my parents for their efforts to give us the opportunity for a better life.”

Throughout high school, Cruz said he was an average student who did not have a clear vision of what career path he wanted to pursue. “My father encouraged me to become an engineer. He saw something in me that I didn’t—a vision and problem-solving skills that would be best applied in an engineering career. Sadly, I didn’t have the confidence then,” he admitted. “I didn’t think I was engineering material.” Little did Cruz realize that within a few short years he would be working as an engineer for Space Exploration Technologies Corp—which is more popularly known as ‘SpaceX.’

What Cruz did know, however, was that he wanted to live an independent life. At the age of 18, shortly after graduating from Forest Hills High School, he joined the United States Army. “I needed direction and discipline in my life,” he said humbly. “I needed to grow up.” He explained how boot camp was the hardest thing he ever experienced in his life but was well worth it. During his three years of service, Cruz worked as a diesel mechanic in a combat engineering unit. “I loved working as a mechanic,” he said. “I was thrust into this field and discovered talents I didn’t know I had.” Unfortunately, Cruz suffered an injury that cut his military service short. “I was disappointed my time in the army was coming to an end, but I was excited to begin a new chapter in my life. Working as an engineer seemed like it could become a reality. It was then that I discovered Vaughn College.”

During his last six months of military service, Cruz began researching colleges that had a focus on engineering and aerospace. “As far-fetched as becoming an engineer was for me then, becoming a pilot was even more of a dream—but one I took seriously,” he said. He applied to several colleges and decided on Vaughn to pursue his engineering and aerospace career. In the fall of 2017, Cruz began the mechanical engineering degree program at Vaughn. He explained how the program, although challenging, gave him the skills to land his job as an associate engineer at SpaceX. Cruz pointed out two of his favorite things about Vaughn: The one-on-one relationship students have with their professors and the small class sizes. “The opportunity to ask questions without judgment and faculty support were driving factors in my success,” he said. “I admit I needed some motivation to keep the momentum going. College is a test of your skills, and Vaughn has the perfect formula to cultivate a student’s success.”

During his time at Vaughn, Cruz was a proud member of the Vaughn student chapter of Engineers Without Borders. He, along with three other Vaughn engineering and technology students, were part of the team led by Miguel Bustamante, PhD, assistant professor of engineering and technology. Together, the group visited the African country of Rwanda to test water supplies in the village of Kibingo. (Read more about their incredible efforts here.)

Cruz completed his bachelor’s degree in mechanical engineering in less than four years—but not without earning his pilot’s license, too! “The military ‘can do’ mentality gave me the discipline and determination to work through the summer and both my winter and spring breaks to earn my pilot’s license by my senior year,” he said triumphantly.

Cruz was determined to land a job before graduating from Vaughn. He sent out several job applications, including one to SpaceX for the position of associate engineer. To his surprise, he received an invitation to interview with SpaceX. Over the course of two months, the excitement and anticipation grew as Cruz completed four interviews in the hope of landing the job at the Kennedy Space Center in Cape Canaveral, Florida. In November 2020, Cruz was offered the position of a lifetime, and he moved to Cape Canaveral right after graduating from Vaughn. “I was over the moon to hear the news that I would be working at my dream job,” he said excitedly. Cruz’s responsibilities included working on all hardware for launch pads, tooling and rocket recovery. “I’m convinced that my combined experience and knowledge that I gained at Vaughn, earning my pilot’s license, the Rwanda project with Engineers Without Borders and my veteran work experience were the winning combination to landing my current job.”

After only three months, Cruz was promoted to the position of manufacturing engineer at SpaceX, where his responsibilities include delivering a fully scalable working piece of hardware for a successful SpaceX rocket launch manifest, among other tasks. “The magnitude of responsibility is immense,” he explained. “We all work long hours, but we love every minute of it.” Cruz points out how SpaceX is a positive environment where everyone takes ownership of their work and has an integral part of the process. “Anything worth doing is worth overdoing,” he said emphatically. “If you told me years ago that I would be working as an engineer—building launch hardware components for rocket ships—I would have told you you’re crazy,” laughed Cruz. “I believe everything happens for a reason. Joining the army, and then finding Vaughn were the steppingstones I needed to launch a career I could only dream of.”

Do you have a passion for engineering or aviation? A degree from Vaughn College can be your launching pad for a futureproof career. Apply today!

A Day in the Life: What it’s Like to Work as an Air Traffic Manager During the Holiday Season

December 2018 Read more
Sign Up for the Vaughn Email Newsletter