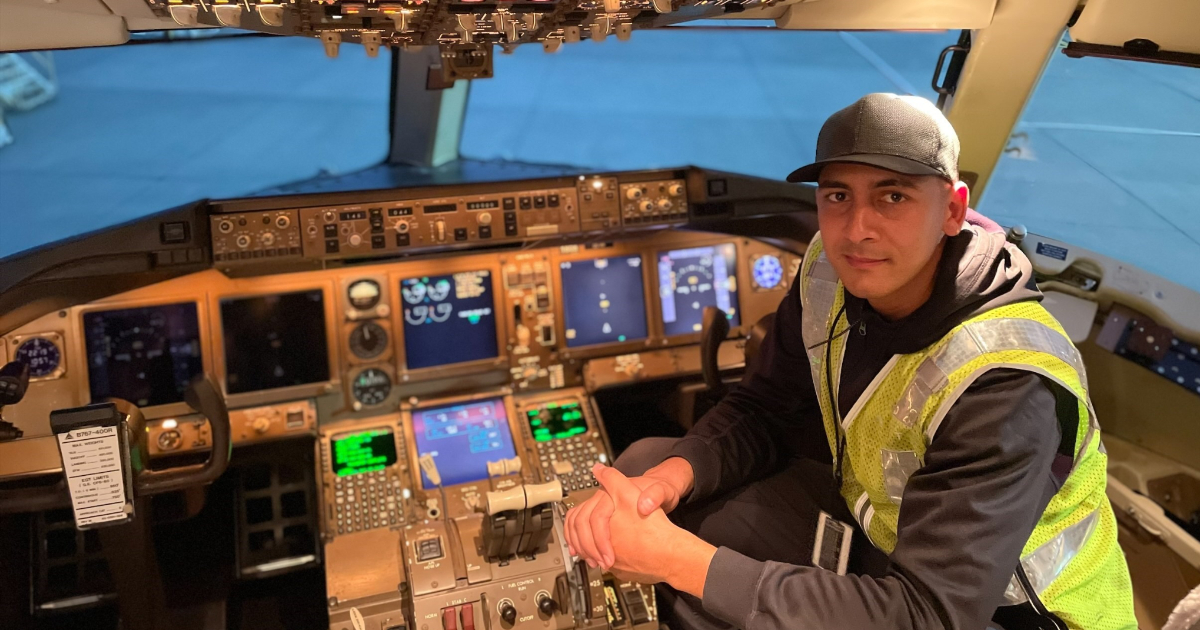 Following in the family footsteps has been an inspiring journey for Vaughn graduate, Mahdi Macbahi ’13, and his two brothers. As fate would have it, their father’s trade as a carpenter was the steppingstone to pursuing degrees in the aviation maintenance industry by studying at Vaughn College.

This month, we spotlight Macbahi and the story of how his aviation maintenance management degree from Vaughn was instrumental in not only helping him land his current position at Delta Air Lines, but also in helping him become an instructor at the College as well.

Growing up in Astoria, New York, Macbahi always had a passion for aviation. From a young age, he dreamed of becoming a pilot. It wasn’t until he reached high school, however, that he decided to pursue a career in aviation maintenance. “Being that my dad was a carpenter, I loved working side-by-side with him on the weekends, helping with his projects,” said Macbahi. “It was during that time that I honed my skills and knew I wanted a job that would combine the two things I loved the most—working with my hands and aviation.” 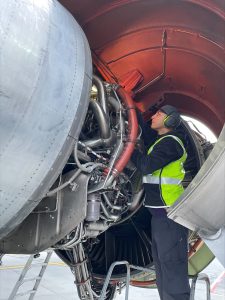 Knowing how eager Macbahi was to earn his degree, a family friend recommended Vaughn as the perfect institution for him to pursue his degree. “I knew about Vaughn College from doing my own research and seeing advertisements but hearing about it from our close family friend really sealed the deal for me.” In 2008, Macbahi enrolled in the College’s Aviation Training Institute, where he pursued an associate degree in occupational science (AOS) in aviation maintenance and then went on to earn his bachelor’s degree in aviation maintenance management. “As someone who loves to work with his hands, I knew I chose the right path,” he said. “At Vaughn, you get your hands dirty and learn as you go. That’s what makes this program so special. The program teaches you how to be a better technician—a better mechanic.”

Nurturing a new passion at Vaughn

As he pursued studies toward his own degree, one of Macbahi’s advisers offered him a tutoring position to help fellow students. “I never thought of myself as a teacher but tutoring gave me an entirely new perspective on a career path,” he explained. After completing his associate degree, Macbahi inquired about becoming an assistant instructor in a sheet metal class. “I was thrilled to learn I would be working with my professor in one of my favorite classes,” he said. With a new position at the College and his newly earned associate degree, it was time to get to work. For the next four years, he worked for regional airlines at LaGuardia Airport—all while working toward his bachelor’s degree. Then, life really took off for Macbahi!

Shortly after graduating with his bachelor’s degree, Macbahi accepted both a new position at Vaughn to teach a hydraulics lecture class, as well as one at Delta Air Lines—stationed at John F. Kennedy (JFK) International Airport—where he has been working for the past seven-and-a-half years. “It’s a big operation at JFK,” he said. “With approximately 230 mechanics, we all have a busy schedule, but I love it. The best part about my job is we learn something new every day.” He says that although his job is demanding, his schedule is flexible enough to accommodate being able to teach at Vaughn. “I never imagined I would discover a new passion of teaching while pursuing my dream in the aviation industry. I suppose you can say I found success by blending my passions.”

How Vaughn made it all possible

At 30-years old, Macbahi says that when reflecting on his life, he owes a great deal of gratitude to Vaughn for making his career possible. “Vaughn gave me the skills and mindset to prepare for a career in the aviation industry,” he said humbly. “Not only am I living my dream—working in the industry—but I’m providing real-world experience to the future generation of aviation mechanics.” As for his personal life, he said he’s grateful for the opportunities provided to him to support his wife, Methela, their young son and a new baby on the way.

Bringing life full circle, Mahdi says his father’s craft as a carpenter and his success at Vaughn not only influenced his career but that of his two younger brothers. “My brother Ali also graduated from Vaughn with a bachelor’s degree in aviation maintenance management, and our youngest brother Rida is currently enrolled at Vaughn, pursuing his AOS in the Airframe and Powerplant program,” he explained. “Our dad, Abdelillah, may not work in the aviation industry, but his strong work ethic, knowledge and skills in craftmanship have molded us into the men we are today.”

Are you interested in a futureproof career? Discover the possibilities of where a Vaughn degree in engineering and technology, management or aviation might take you. Apply today!

March 2019 Read more
Sign Up for the Vaughn Email Newsletter