It’s hard to pinpoint what the most important job in the world is. Brain surgeons, rocket scientists, physicists, intelligence agents and world leaders have very significant positions. But there is one job that many of us have that is immeasurably rewarding, despite its non-existent paycheck—being a parent. It’s not an easy job, especially when you have to juggle all of your other responsibilities with it. This Father’s Day, we’re celebrating one of our own students who is working especially hard, both at home and in school, to build a brighter future for his family. 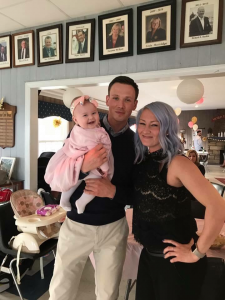 Being a devoted family man has new meaning for Thomas Dekenipp ’19, a 30-year old Vaughn College engineering major who will be celebrating his first Father’s Day this month. Dekenipp and his girlfriend, Jaime, welcomed their daughter, Harper, last November and Dekenipp said being a dad is the greatest gift he could ever receive.

“I come from a large family,” Dekenipp said. “We all grew up in the same apartment building in Brooklyn, which kept us very close. So, it means so much to me to be starting my own family.”

After high school, Dekenipp enlisted in the U.S. Army, where he worked for six years as a helicopter mechanic in the 82nd Airborne Division. “I didn’t realize I had an interest in engineering until I joined the Army,” Dekenipp explained. “The Army opened doors for me and sparked an interest to seek a degree when I returned stateside.” Dekenipp completed two tours in Afghanistan and was honorably discharged in 2011. Soon after, he decided to return to Afghanistan to work for the next 18 months as a contractor. Upon returning, Dekenipp wanted to pursue his degree under the GI Bill, but realized he needed to find a school that offered the Yellow Ribbon Program―a provision of the GI Bill that can help students attend private colleges at little or no cost―to help cover the additional tuition expenses. That’s how he found Vaughn College. Dekenipp is now a junior at Vaughn, where he is pursuing a degree in mechanical engineering technology and computer-aided design, and feels grateful to have the opportunity to further his career. “Attending Vaughn was a nice transition from the military,” said Dekenipp. “There’s a good number of vets who attend Vaughn so I feel right at home. The faculty is welcoming and is extremely supportive in helping their students further their success.”

With his first Father’s Day around the corner, Dekenipp said he’s been reflecting on past Father’s Day’s with his own dad. Dekenipp recalls how his dad loved to cook and can remember the wonderful aromas emanating from the kitchen while music played in the background. “It was a very warm and welcoming feeling,” Dekenipp recalls. “I’m excited to recreate those memories for Harper. I only want the best for my family,” Dekenipp said humbly. “I’m confident my degree from Vaughn will set me on a path to success to give them a beautiful life. It’s important to me to set a good example for my daughter,” he continued.

When asked what his plans are for Father’s Day, Dekenipp laughed and said Jaimie is keeping it a surprise. “Whatever we do, I know I’ll be surrounded by my amazing family. I’m blessed to be a dad and Harper is the reason I can celebrate. She’s ‘Daddy’s Little Girl.’”

June 2020 Read more
Sign Up for the Vaughn Email Newsletter