The excitement continued last December as the Vaughn College robotics team participated in the VEX Robotics Competition Tower Takeover in Cancun, Mexico, winning the Build Award for the first time in the team’s history and placing second overall in the competition.

As one of the top competitors of the renowned VEX U Robotics World Championship, Vaughn’s seven-member team was invited to participate in Mexico’s VEX U Reeduca Robotics Competition for the fifth year as part of the 2019 Torneo Internacional de Robótica VEX Reeduca. 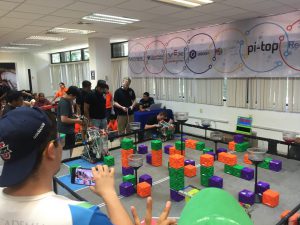 The VEX Robotics Competition Tower Takeover was the name of the game—and a challenging one it was at that. This game was played on a 12′ x 12′ square field. Two alliances―composed of two teams each―competed in matches consisting of a forty-five-second (0:45) “Autonomous Period,” followed by a one-minute and forty-five-second (1:15) “Driver-Controlled Period.” The object of the game was to place cubes in towers or to score cubes in goals. The team to score the highest number of points is declared the winner.

How it played out

In the first qualifying competition, Vaughn competed against four Mexican teams and won all four matches. During the next qualifier, Vaughn won six out of seven matches, which advanced the team to second place in the playoff round. In a nail-biting quarterfinal match, Vaughn finished second, losing to Universidad Tecnologica de Matamoros, 7-6.

For the first time in Vaughn’s VEX Robotics Competition history, the team won the coveted Build Award. To receive this outstanding recognition, a team must construct a robot that can demonstrate effective use of materials and efficiently use mechanical and electrical components. The robot must be high-quality, robust, demonstrate reliability on the field and be able to hold up under competition conditions. “Our team did an outstanding job,” said Dr. Hossein Rahemi, chair of the engineering and technology department at Vaughn. “I’m extremely proud of them. Winning the Build Award is a great achievement.”

“Our team has what it takes to win the title back again this year,” Rahemi said. “We even have some seniors on the team that have been with us from the start. It would be wonderful to see them, and our other great team members named ‘world champions’ once again.”

Interested in robotics? Learn more about earning an engineering and technology degree at Vaughn.

August 2018 Read more
Sign Up for the Vaughn Email Newsletter