What could be more exciting than defending a world championship title? The Vaughn College of Aeronautics and Technology Robotics Team is going head-to-head this month with 62 college teams from around the world at the 2017 VEX Worlds Robotics Competition in Louisville, Kentucky. The incumbent world champions want to keep their standing and prove they have what it takes to earn the title for the second consecutive year.

“VEX Starstruck” is the theme for this year’s robotics competition. The game is played on a 12′ x 12′ field where two alliances, consisting of two teams each, compete to attain the highest score. The goal is for the robot to launch the most stars and cubes over the fence. The opponent can throw the stars and cubes back over, and at the end, the team with the highest score advances to the next round.

The Vaughn robotics team knows what it takes to win. Maintaining their world championship title means keeping up with the latest trends in the robotics industry and knowing how to execute the ultimate delivery.

Here are some of the ways the 10-person team continues to excel this year to meet the fierce competition:

Being a part of the robotics team is both fun and challenging. Bilal Rashid ’18, president of the Vaughn robotics team and a sophomore at the College, knows first-hand how hard work and dedication can go a long way. Bilal was recognized for his leadership skills as a member of last year’s winning team and was elected president of this year’s team. He explains how his team has been preparing for the competition since last summer. “It’s definitely a team effort,” Bilal said. “It started off with all of us brainstorming ideas until we got it right.” Although it took one month to build their robot, the team invested over one hundred hours to get it ready for competition. With the big day only weeks away, Bilal said the team has been in overdrive by playing against each other to sharpen their skills. “We have been working day and night to ensure our robot is perfect,” said Bilal. “If we can beat ourselves, then we are confident we can beat other teams as well.” 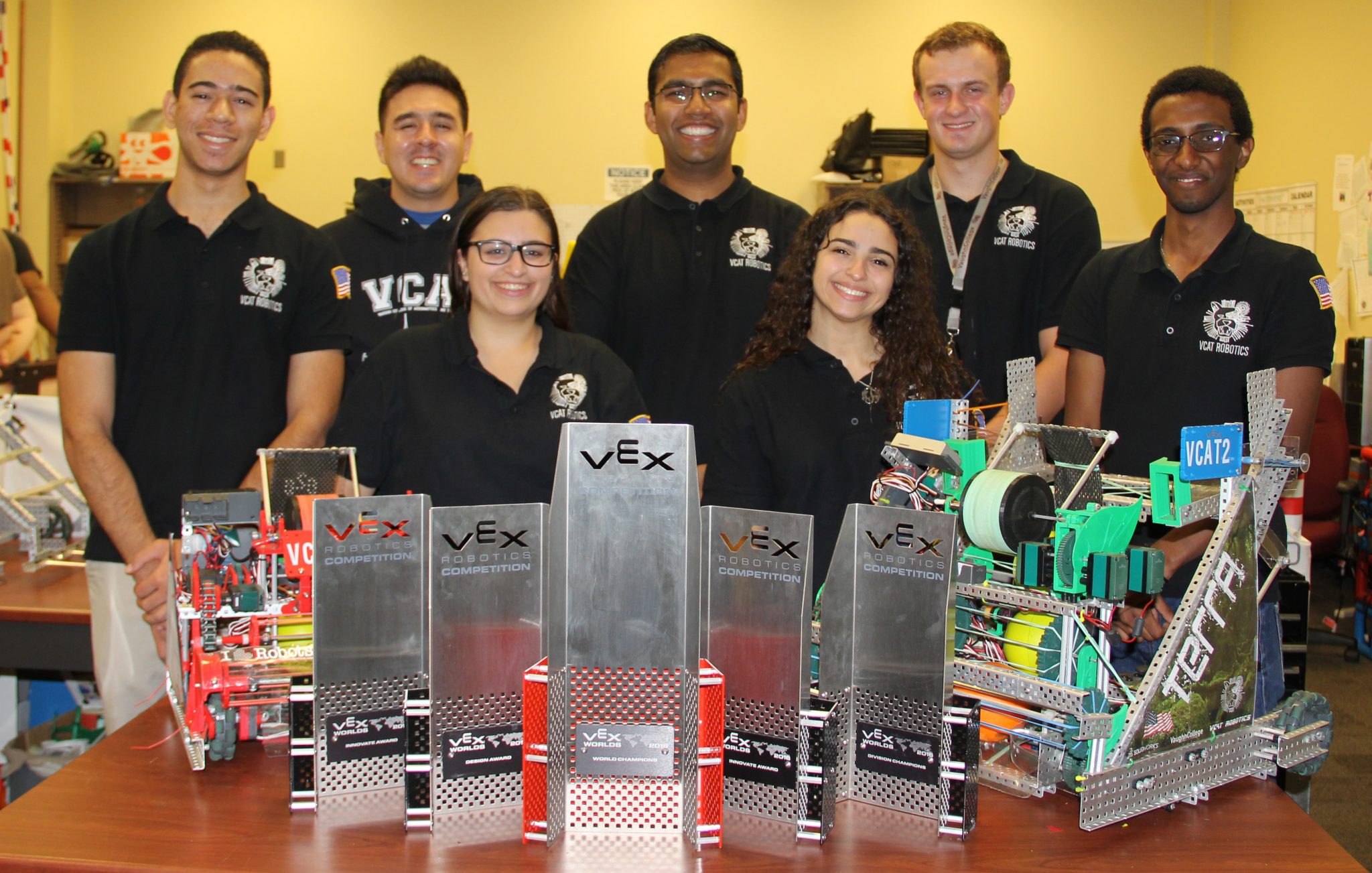 Message from the team president

Bilal offers some words of encouragement to his fellow teammates before the big day: “I believe we are on the right track for winning the world championship competition again this year. We couldn’t have come this far without the support and guidance of Vaughn professors and faculty. We’re in it to win it and to make our college community proud.”

It was a nail-biting three days at the 2017 VEX World Championship Competition in Louisville, Kentucky last month. Vaughn’s Robotics team went up against 10 teams, winning nine out of 10 matches placing them in third-place and qualifying them for the playoff round.  At the quarter finals, Vaughn competed among the top eight teams and defeated a team from China advancing them to the semi-final playoff round against AURA (a team from the University of Auckland in New Zealand.) After an intense standoff during the third match of the semi-finals, AURA defeated Vaughn, winning the spot to advance to the finals.

“The Vaughn Robotics Team has done an incredible job placing as the third top robotics team in the world,” said Dr. Hossein Rahemi, professor and chair of the Vaughn engineering and technology department. “Congratulations to all the team members for keeping their standing as one of the top ranked competitors in the 2017 world championship for four years in a row.

Looking to get involved? Learn more about how you can join or start a club!

10 Tips for De-stressing Before Finals