The management department at Vaughn College welcomed Terry Kilby to its Industry Insights Speaker Series, sponsored by ATL Partners. Hosted by Dr. Maxine Lubner and Adjunct Professor Loretta Alkalay, the live presentation by Kilby—who is a renowned aerial photographer and 3D specialist—focused on drones and the use of 3D scanning for historical preservation and Web3. The event showed Vaughn students new and exciting ways where they can apply their degrees in engineering and technology. Additionally, focus was given to the future direction of the industry as it pertains to the metaverse, Web3, NFT and the blockchain.

For over a decade, 3D capture artist Terry Kilby has been recognized as a leading international expert—both as an aerial photographer and pioneer in the specialties of photogrammetry (3D scanning), panoramic photography (VR photography) and time lapse. Through the use of drones and the application of photogrammetry, Kilby has mastered the higher-level technique of capturing contemporary history and artfully creating photorealistic 3D models for historic preservation, film sets, archaeological sites—and beyond. His groundbreaking work in the documentation of historical sites and monuments is a mind-blowing experience that brings the past to life. Before Kilby found his passion for drones and aerial photography, he worked as mobile software developer and technology lead with a Fortune 50 company.

Growing up as an avid radio control (RC) hobbyist, Kilby explained how he saw the beginning of the civilian drone industry as a continuation of the RC hobby world. Over the years, he navigated through the drone industry where he witnessed and experienced groundbreaking technology which set the stage for the fascinating work he is known for today.

Sharing his love and knowledge for drones and 3D technology led Kilby to become an educator in the fields of science, technology, engineering and mathematics (STEM). His involvement with foundations and children’s camps was instrumental in spreading the word about drones to the younger generation. Part of his passion with the children was teaching them how to build their first quad copters through the application of 3D printing.

Blending his creative talents with his experience in software and web development, Kilby developed advanced drone techniques that continue to make a mark in the corporate and historical preservation arenas. Here are some of them:

The highlight of Kilby’s presentation centered on the amazing capabilities of 3D scanning technology. Here are the types of scanning he uses in his work: 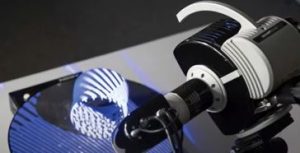 Described as an extremely accurate method of 3D scanning, Kilby shared how this technique assisted in extracting a fingerprint from a 3,000-year-old artifact.

LIDAR is a method of 3D scanning that measures distance through the use of beams of light. For years, it has been used in aviation, being placed under small aircrafts such as Cessnas and terrestrial LIDAR.

By using photogrammetry, Kilby showcased some of his unique techniques in working with historic structures, one of which was the Berlin Wall. Here are some other fascinating projects that Kilby featured via the use of photogrammetry:

Kilby used a Phantom 4 Pro Drone to capture images that were eventually used to create a 3D animated rendering of a plantation house that had been built in the 1600s. His work was used to help in the restoration project of this historical building.

Kilby was tasked to create a captivating visual of the Mayfield Theatre in Baltimore—the first African American-owned theatre in the U.S.—which fell into disrepair after undergoing a fire. Through his amazing talents, Kilby created a visual that told the story of the theater, and which ultimately gained the attention of an interested developer who restored the building’s facade.

Over the course of three years, a team of archaeologists, historians, engineers and artists used Kilby’s 3D scans of a dig site in Annapolis, Maryland to uncover unique features of slave’s quarters from years ago. They then used that information to recreate an accurate depiction of the building’s interior and exterior.

Kilby addressed the three main areas he works in when it comes to drones and 3D scanning. These are:

Just when attendees of the Industry Insights Speaker Series thought they’d seen the coolest applications that used drones and 3D scanning technology, Kilby went on to describe the different forms of asset presentation. Here is the variety of platforms he uses for asset presentation:

Technology that is influencing the future

Kilby concluded by discussing how his work will fit into the future of the internet – including the blockchain, NFTs and the metaverse.

This decentralized ledger allows multiple individuals to store records or information on a “block” in the chain that’s secured by cryptography—which is the storing and transmitting of data in encrypted formats.

Kilby’s thoughts on the cultural impact of blockchain technology are that it:

Non-fungible tokens—or NFTs—are digital assets that are bought and sold online. In 2021, the NFT market was valued at $41 billion dollars.

The excitement surrounding Kilby’s work with the use of drones and 3D scanning technology is fueling interest in these futuristic career-driven fields. As a leading institution in engineering and technology, aviation and management, Vaughn College is setting the pace by providing its students with the necessary skills to land jobs in these fascinating industries. Which programs interest you? Check each of them out:

Are you ready to pursue your futureproof career? Discover the possibilities of an amazing career with one of our programs. Apply today!

Ten Reasons for Landing a Career in Aviation

November 2019 Read more
Sign Up for the Vaughn Email Newsletter