Vaughn Alumna Leonie Barden ’07 Traces Her Steps to the Stars

Reaching for the stars took on a whole new meaning for Vaughn College alumna Leonie Barden ’07, a systems engineer for The Boeing Company at the Kennedy Space Center in Florida.

Growing up in New York City, Barden knew from an early age she had a passion for airplanes. This passion was met with challenges since she was surrounded by a family of scientists who worked in the medical field. Raised by her Jamaican single mother, Barden said she travelled often throughout her childhood and visited family in Jamaica.

She recalls a time when her mother asked her, “What do you want to be when you grow up?”

Barden replied, “Mom, I want to be a stewardess.” Barden looks back on that moment fondly as she’s come a long way since then having forged ahead in the industry as a mechanical engineer. It should be noted, that this success wasn’t without sacrifice, dedication and a large helping of courage.

After high school, Barden attended Adelphi University for a short time and then enrolled in a local community college. After strong test scores proved she had an aptitude for science and math, Barden said her guidance counselor encouraged her to pursue her passion for flight.

“I knew I wanted to do something technical,” Barden said. “While my friends were taking business courses, I knew my path was taking a different direction. My counselor was instrumental in guiding me to find my destiny.”

She transferred to Vaughn College, where she enrolled in the aeronautical engineering technology Associate in Applied Science (AAS) degree program. Upon earning her associate degree, Barden became focused on pursuing a bachelor’s degree.

At that time, Vaughn was seeking accreditation and thus transitioned to an ABET-accredited degree program. During that time, Barden worked full-time as a computer technician. She returned to Vaughn in 2004 on a part-time basis where she took night classes. The time and work paid off as Barden earned her bachelor’s degree in mechanical engineering technology: aeronautical and computer-aided design.in 2007.

Upon graduation, Barden was committed to finding her dream job. She applied to The Boeing Company and in April 2008 received a job offer at the Kennedy Space Center in Florida as a systems engineer. “It was a big move for me, especially leaving my current job at the time, but I knew I had to take the chance,” Barden said. “I’ve always been fascinated by airplanes and this was my chance to live my dream.”

REACHING FOR THE STARS

For the past 10 years, Barden has been working as a systems engineer where she manufactures hardware for the National Aeronautics and Space Administration’s (NASA) space exploration programs which include the International Space Station (ISS) and Commercial Crew Transportation System. “Every day is different and presents a new set of challenges,” she explained. “My job is to take projects from the cradle to the grave, supporting the full life cycle of a product – from design to manufacturing and system retirement.”

Barden’s most recent project has been to work on Boeing’s (Crew Space Transportation CST-100 Starliner) program, the latest spacecraft design to transport crew to the International Space Station and low-Earth orbit. “It’s humbling and overwhelming to be a part of something that impacts mankind on this level,” said Barden. “All eyes of the world are on space travel. The entire experience makes me feel special. It’s a magical moment to watch a rocket launch and to know I had a part in making it happen.”

VAUGHN’S IMPACT ON HER CAREER

Reflecting on her time at Vaughn, Barden said the College gave her a foundation to use the knowledge she acquired for critical thinking.

When asked what motivated her to where she is today, Barden replied, “Determination and perseverance. Never give up on your dream. I reached for the stars, never imagining my work would literally make it there.”

Vaughn’s fall Open House is scheduled for Saturday, November 10 and Saturday, November 17 between 10 a.m. and 2 p.m. It’s a fun and informative day where interested students, along with their families, can meet with faculty and staff to ask questions and tour the campus. 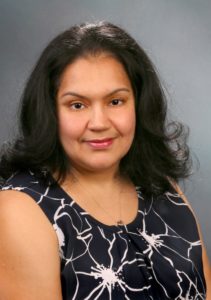