Vaughn College hosted more than 70 teams from surrounding counties for the sixth annual VEX U and VRC Qualifier robotics tournaments on Friday, February 28 and Saturday, February 29.

The events provided high school and college students with the opportunity to showcase their design skills through project challenges that enhance their science, technology, engineering and mathematics (STEM) skills through the engineering experimentation of designing and building robots.

Organizing and hosting these events as an institution allows club members to not only be mentors to other participants but also to be fully immersed in the preparation while developing the leadership and organizational skills necessary for a successful career trajectory.

The VEX U tournament launched the robotics competition weekend. This college level robotics event provides students with more flexibility for customization while still managing the real-world limitations of the restricted environment.

Vaughn’s team, VCAT, was awarded the Robot Skills Champion award and the Excellence Award distinction, which in turn qualified them for the world championship.

The VRC Qualifier tournament became the largest high school event in the northeast, hosting more than 60 teams and 34 high schools, competing and displaying their robotics skills.

Ultimately, the Roverines Robotics team from Newfield High School in Selden, New York was awarded the Excellence Award and Tournament Champions distinction which qualified them for the state and regional championship. The Centereach Cougears from Centereach High School in Centereach, New York were also awarded the Tournament Champions distinction also qualifying them for state and regional championships.

Faculty Adviser and Engineering and Technology Department Chair Dr. Hossein Rahemi, was on-site for the events and aided the teams during the matches. “I’m so proud of VCAT and all of the teams participating this weekend,” expressed Rahemi. “It is a great experience to see students not only utilize their STEM skills but further develop life-long teamwork, leadership and communication skills.”

Tournaments are held year-round at the regional, state and national levels and conclude each April at the VEX Robotics World Championship. 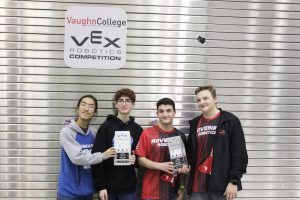 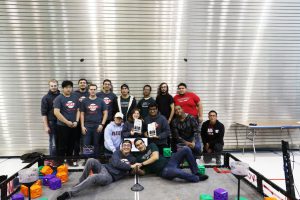 Vaughn’s team, VCAT, was awarded the Robot Skills Champion and the Excellence Award distinctions at the VEX U tournament. 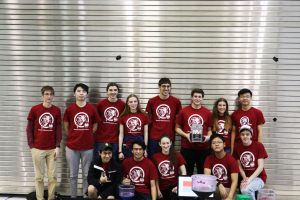 Worcester Polytechnic Institute’s team, Hyperclocked, from Worcester, Massachusetts was awarded the Tournament Champions distinction at the VEX U tournament.