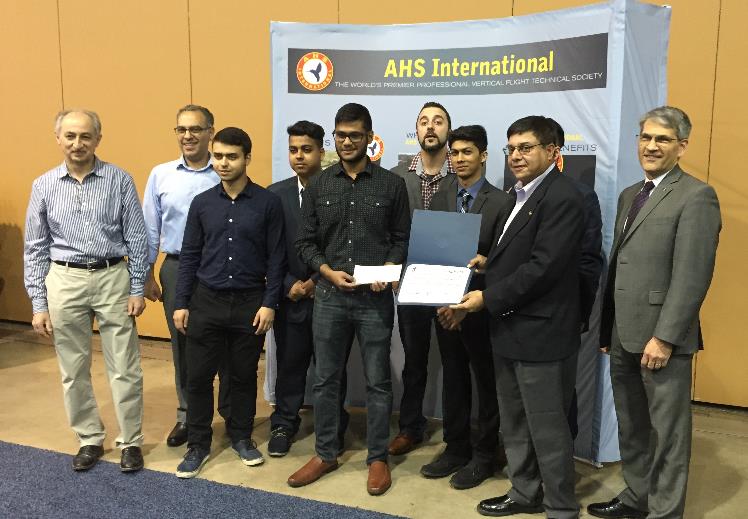 Vaughn’s unmanned aerial vehicle (UAV) team finished in first place with their performance in the 2018 American Helicopter Society Micro Air Vehicle (MAV) competition. The team went against competitors from Penn State and the University of Maryland to take the win in the sixth annual MAV student challenge competition held at the Phoenix Convention Center on May 14, 2018.

Vaughn’s UAV team developed two drones to compete in both the manual and autonomous categories. Both drones were designed to perform vertical takeoff and landing (VTOL) with onboard flight-stabilization and camera. For both the autonomous and manual challenges, a drone carrying a package was expected to take off from a base station, move around an obstacle and drop off a package on a pre-identified delivery station; then takeoff from the delivery station and land on the pickup station to gather a second package; and then finally fly back to the base station to land and deliver that package. Among all participating teams, Vaughn College and only one other team were able to complete the remotely-operated tasks within the ten-minute time limit with Vaughn’s remote control team completing three flawless successful runs.

On Tuesday May 15, judges from the aerospace industries evaluated the teams’ performance for both the remote and autonomous control categories. Vaughn UAV received the highest score in both categories and a $3,000 award. Along with being the competition winners the remote control team received the “Best Remotely-Controlled Target Search” award.

“This is a challenging competition,” said Dr. Hossein Rahemi, chair of Vaughn College’s engineering and technology department. “Vaughn’s UAV team is very committed and does an incredible job at competing and we congratulate them for their success as champions.” 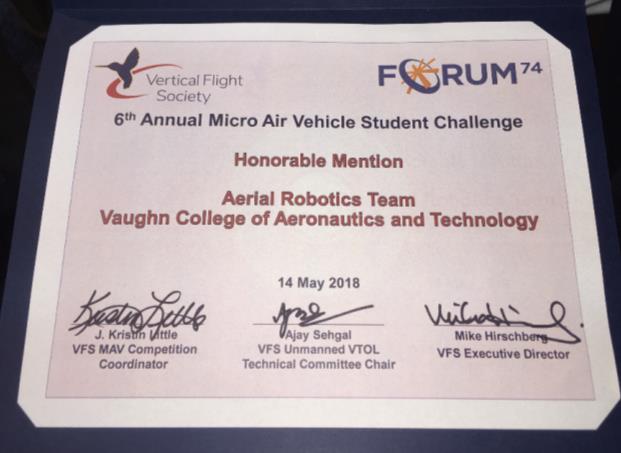