The Vaughn College robotics club participated at Purdue University’s fall robotics competition in West Lafayette, Indiana on November 9. This is the first of four preliminary competitions that Vaughn plans to participate in leading up to the Vex Robotics World Championship in April.

The team started out strong, ranking first for the majority of the competition, but experienced some mechanical and system communication failures that took their toll on Vaughn’s robots. After a long and fast-paced competition, consisting of 17 matches, the team finished in second place for qualifications and third place overall.

“This was a great opportunity for us to test our designs and see where our robots needed improvement,” said Jefferson Maldonado, club president.  “We are glad to have the opportunity to compete at these smaller events first, so we’ll be ready for the world championships.”

The Vaughn robotics team won the judge’s choice award for their innovative use of sensors and electronics to deliver high quality autonomous routines throughout the competition. The judges also recognized the team’s efforts in raising awareness about science, technology, engineering and mathematics (STEM) in fun and creative ways on campus and throughout the community. 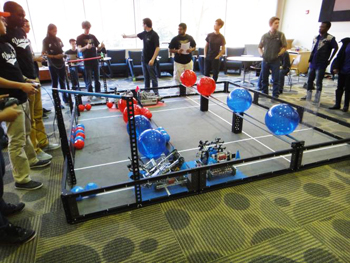