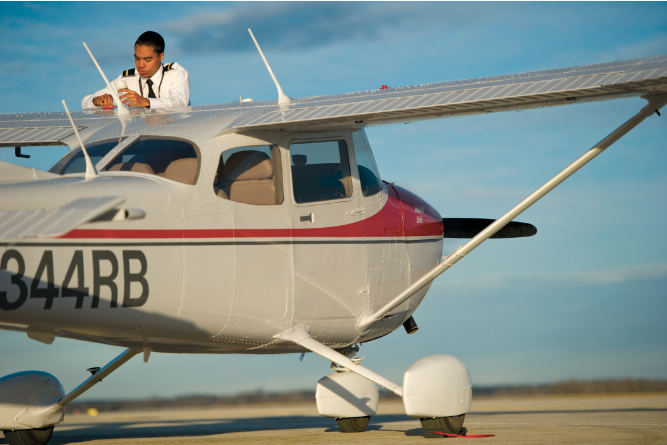 On Tuesday, December 15, the Vaughn College community gathered via Zoom to recognize and celebrate the life of Daniel Turner, a Vaughn student pilot whose family has recently founded a scholarship in his name. Alumni and aviation industry leaders joined in to share their experiences and dedicated support for the future leaders of aviation and aerospace. Turner was the finest example of a Vaughn student who understood the hard work involved in making dreams a reality. The scholarship will support Black students in need and honor his legacy.

“Daniel was exceedingly loved by our family and by his friends,” said Turner’s sister Andrea. “His motto was ‘don’t waste your life,’ which left an indelible imprint on all of us.” Turner was a sophomore at Vaughn College and among the first group of students selected for the Redbird flight training program with partner institute Redbird Skyport in San Marcos, Texas.

He had received his private pilot’s license and instrument rating, and was working on his next rating, the commercial certificate, when he unexpectedly passed away on a day off while engaged in recreational activity. Daniel’s family and friends have been working closely with the College to set up the Daniel Turner Scholarship fund, which will benefit future Black students who are pursuing their dream of becoming commercial pilots.

Industry leaders Nick Calio, president and chief executive officer at Airlines for America, Mary-Ellen Jones, vice president, Asia-Pacific sales at Pratt & Whitney, Gary J. Spulak, president of Embraer Aircraft Holding, Inc., and Bobbi Wells, president of the International Aviation Women’s Association and vice president of safety and airworthiness at FedEx Express, were guest speakers at the virtual event. They delivered inspiring messages about the future of aviation and why institutions like Vaughn College are critical to preparing the future leaders of aviation and aerospace, and encouraged attendees to contribute to the scholarship fund in Turner’s honor.

Turner’s family also attended the event, and his classmates sent video messages sharing their memories and their hopes for the scholarship fund’s success.

Donations to the Daniel Turner Scholarship fund can be submitted at vaughn.edu/daniel-turnerscholarship.