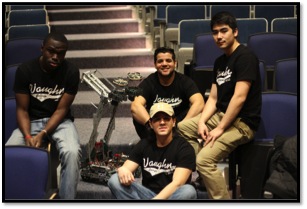 On Friday, February 28, the Vaughn College robotics club returned to compete at the VEX U Toss Up competition at Quinsigamond Community College in Worcester, MA and once again put on an impressive performance.  The team was undefeated throughout the entire competition and ended up winning the main field competition and took first place in the finals. This is the third of four preliminary competitions that Vaughn plans to participate in leading up to the Vex Robotics World Championship in April.

In the VEX U competition, college students have to conquer the same game, entitled Toss Up. The teams build two different sized innovative robots that work together to score the most points possible in qualification matches, elimination matches and skills challenges. Through their participation in VEX U, students get to apply the theoretical STEM knowledge they learn in their college courses, while picking-up many of the academic and life skills necessary to excel in the workforce. 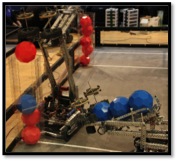