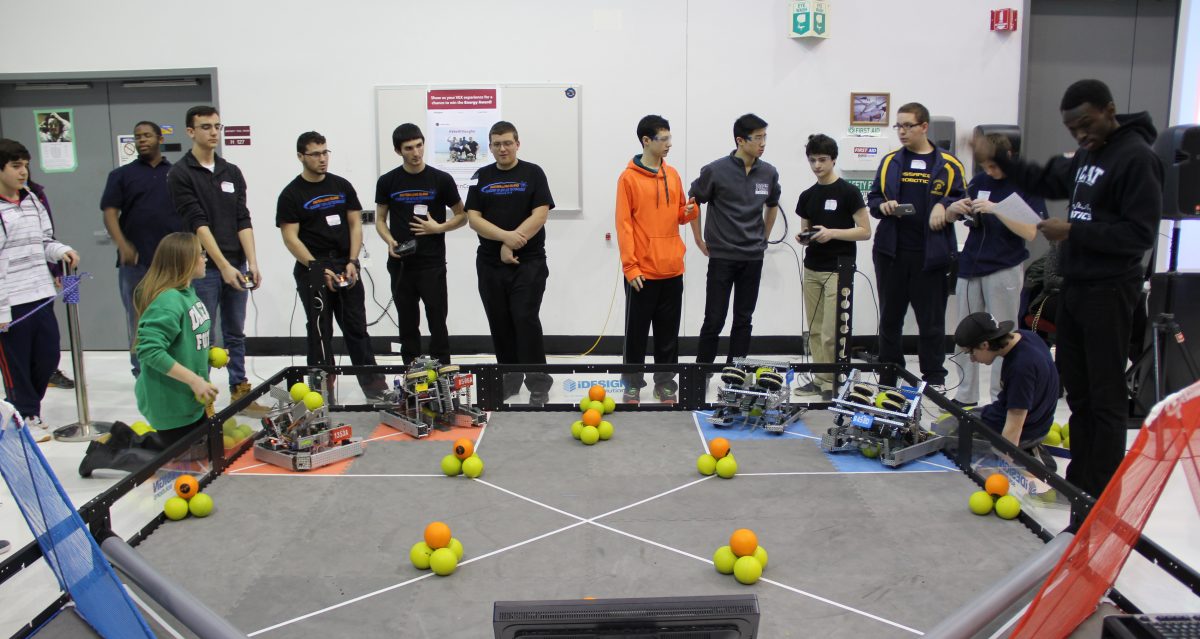 Twenty-nine high school robotics teams from Queens, Brooklyn, the Bronx, Nassau and Suffolk counties gathered in the William DeCota Hangar for the VEX Robotics qualifier hosted by Vaughn College on Saturday, February 13. The teams competed for a chance to attend the state or national championships.

After having their robots evaluated by a panel of judges, each team was given the opportunity to adjust their robots and practice their skills before the competition began. The day’s competitions began around 11 a.m. and continued until 5 p.m., with elimination rounds leading to a final championship match. An alliance of teams from Massapequa High School (Massapequa, NY), The Harvey School (Katonah, NY) and Paul D. Schreiber High School (Port Washington, NY) won the championship, while a team from Farmingdale High School (Farmingdale, NY) won the Excellence Award.

The event allowed high school students to meet and interact with robotics and mechatronic engineering students from Vaughn, and glean some information from them about what to expect should they explore robotics in college.

“We love being at these events, and being able to show students that they can continue to explore this field in college,” said Alex Uquillas ’16, president of Vaughn’s robotics club. “To see the excitement on students’ faces and to know that they can explore something they’re so passionate about is very important to us.”

The event also provided an opportunity for Vaughn’s faculty to see the next generation of engineers in action.

“The field of mechatronic engineering is quickly growing, with applications across a variety of industries,” said Dr. Hossein Rahemi, chair of the engineering and technology department at Vaughn. “Seeing so many young students with a passion for robotics and engineering is encouraging, because the industry is going to need talented engineers.”

The students share the team’s and faculty’s enthusiasm, as competitors with a variety of interests came together to build impressive machines for the day’s competition.

“I got into robotics because I was injured and couldn’t be a cheerleader anymore,” said Amanda Denning of St. Catherine’s Academy, an all-girls school in the Bronx. “A friend suggested I come with her to robotics team practice and I fell in love with it.”

The competition followed the VEX U college qualifier on Friday, February 12, at which the Vaughn College team won the Excellence Award and qualified for the VEX Worlds championship. The team will compete at the VEX Worlds on April 20, 2016 in Louisville, KY.