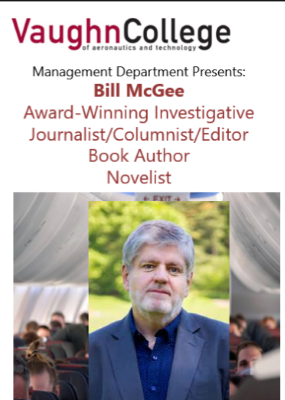 On Wednesday, March 3, the management department welcomed speaker William McGee, investigative journalist and editor. McGee has more than 25 years of experience in journalism and has written for notable publications such as USA Today, Consumer Report, Condé Nast Traveler and more. His articles focus on the airline industry and his book, Attention All Passengers: The Airlines’ Dangerous Descent – and How to Reclaim Our Skies., is used in the College’s curriculum.

His talk touched on many aspects of the airline industry including safety issues, outsourcing and the airlines relationship with the FAA. McGee also highlighted passenger rights and consumer issues in the era of COVID-19.

In 2010, on behalf of Consumers Union, he served as the lone passenger advocate on the U.S. Department of Transportation’s Future of Aviation Advisory Committee. Prior to becoming a journalist, McGee spent nearly seven years in airline flight operations management; he is an FAA-licensed aircraft dispatcher and served in the U.S. Air Force Auxiliary.