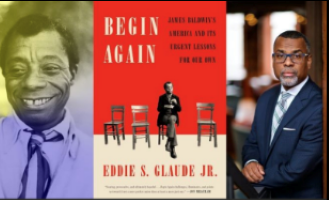 Dr. Glaude is the chair of the african american studies department at Princeton and also the author of Democracy in Black. He joined the Vaughn community for a virtual discussion on Tuesday, September 22.

James Baldwin’s writing focused heavily on racial and social issues in Western society, most notably in America, during the mid-twentieth century. More than 80 attendees joined to learn about Baldwin’s teachings through Glaude’s lens and how they apply to modern-day society.

Glaude’s research helped illustrate an image of Baldwin during his time while also highlighting how he would likely view the events of today.

Students were reminded to look to Baldwin not just for perspective and inspiration but for instruction and guidance and to remember that responsibility is not lost, it is abdicated. It is only when one refuses abdication that they can truly begin again.

Glaude left students with the following message: “Walk like the giants you are, imagine yourself in the grandest of terms and shock the world.”